What is U.K.R.D.? That's really a good question. U.K.R.D. is often referred to as a "mysterious" company. And indeed, if you are looking for information about this company from China, these are rarely sown. What is well known is that in the early 1990's, this company released some dinosaur figures in three different sizes from a sort of hard rubber. 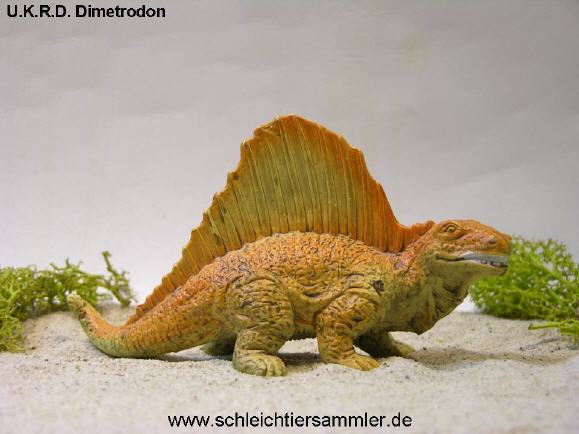 If you (like me) grew up as a child of the 1990s, then you didn’t care about the company of the figures, and yet surely everyone has had one or the other figure of this company in their collection without knowing it.
Nevertheless, the figures can be easily identified. All figures bear the stamp "U.K.R.D.", "Made in China", the year of production, as well as the species, which should be represented on the belly. Furthermore, there is a letter and the serial number of the figure on the belly. Also typical for the representation of the figures is a very wrinkled elephant-like design of the skin.

Some of the figures came in different color variations. As can be seen on the pictures to the right, there were, for example, the Apatosaurus both in yellow with brown stripes, as well as in gray basic color with stripes in green and orange.

What strikes attentive observers are the similarities to some paleo artwork by John Sibbick (see right). Thus, the "Ankylosaurus" and the Brachiosaurus are strikingly similar to the images of Sibbick, which is not necessarily bad, especially at the time of release.

By referring to one of the outstanding artists, the figures stand out clearly from the other cheap "Chinasaurs" back then. If you compare the figures with other models of well-known manufacturers, the U.K.R.D. figures do not have to hide. So besides the price, the general look is certainly the reason why these dinosaurs were so popular in children's rooms.

In my search for the origin of this company, I always came very quickly in dead ends. Quickly one finds the always same figures of the years 1991-1993 on ebay and other Shops. Information about the company itself is in vain. But since I didn’t want to give up fast, I also found a King Kong figure and a Stegosaurus from 1986 in addition to the well-known figures. 1986? Aha! After further research it happened more often that I came across figures who wore both the lettering "U.K.R.D." and "Dor Mei" on the stomach. What does that mean? I don’t know. Dor Mei is more well-known among collectors for their monster figures, such as Godzilla and Dragons, who have been certainly seen once.

The exact reasons why this double name was present and why they disappeared from the assortment, we will probably not learn. However, I would like to point out the following at this point:

So-called Chinasaurs from the 80s and beyond had many pollutants in them and should be treated with care for collectors with children! Not infrequently there were brain or other injuries in children, which is why toys from China rightly had its bad reputation back then.
Be sure to read the following blog post by LeadSafeMama.com, which shows frightening results:

The beginning in 1991 Museum Line

After the figures from the 1986 years gradually disappeared 1991 came the first known 12 figures on the market. These were all about 5-6 inches long. These include Apatosaurus, Allosaurus, Ankylosaurus, Brachiosaurus, Dimetrodon, Edmontosaurus, Pachycephalosaurus, Parasaurlophus, Protoceratops, Stegosaurus, Triceratops and Tyrannosaurus. Although no one would call this series museum pieces, it is called "Museum Line". Nevertheless, the figures convince by a realistic, if not scientifically correct representation.

This year, the range has been supplemented by 12 more small figures. New in this series was a Pteranodon, Iguanodon and Velociraptor. The Protoceratops, Edmontosaurus and Ankylosaurus had to clear the field. The new figures were all about 10 cm (4 inches) long. According to Randy Knol's dinosaurcollectorsitea.com website, the new Camarasaurus was one of the best for many years (http://www.dinosaurcollectorsitea.com/ukrd92.html)

In 1993, a final series with even smaller figures came out. Unfortunately, I do not have many pictures of this series and I am pleased about messages and informations of this kind. The figures were about 11cm (2 inches) long. New to this line was a Styracosaurus.

They may not be the most sought-after collectors' items, but they certainly bring a lot of nostalgia for many children of the 90s. They are not museum pieces, like a Carnegie line, but they don’t want to be. The figures are exactly what they should be: toys; and in that they are very good! The reference to the classic Paleo art gives them an extra charm.

Who wants to get such a figure, should have no problems getting one on ebay & Co. There are plenty. For me, the figures definitely have the nostalgia bonus. Unfortunately, my toys fell victim to an extermination action from earlier, but I still have some pictures :)